Thus begins our fourth week since Ryan’s returned to work. I had to check the calendar and count because it has all blurred together. The first day was probably the easiest because the kids were so shocked by my constant presence, they were on their best behavior. The novelty wore off by the second day.

Overall, however, things have been going better than I expected. As I laid in bed convalescing over the summer (read: dreading the end of Ryan’s vacation time) I started thinking of ways to make this postpartum transition easier than the last. I concluded that I need to be proactive about my own sanity. Keeping myself calm has become my new priority and that’s made for a few changes.

I’ve worked to get back into a routine around the house and so far I’ve been successful every other week (I’ll take it!). When Ryan was home this summer, and exclusively in charge of the oldest three kids, he managed to get them all to nap at the same time each day. I have become the protector of this schedule! Our days are much more structured and predictable now. What a relief! This also means that I have a better sense of what’s going to happen each day and can pick when the best time would be to do a craft, watch a movie, unload the dishwasher or exercise. A little bit of foresight goes a very long way.

Having a weekly schedule also helps keep me from becoming frazzled. The points in the day when the kids are occupying themselves without fighting are short and sweet. I have to be on top of my game if I want to complete a task before they notice I’m not hovering over them admiring every tower they build. When these times come up, I know what needs to be done. There is a lot less frantic bouncing between half done chores when I can say “ok, today is Tuesday; I just need to keep the laundry going and the bathrooms will wait until Thursday.” More importantly, it helps me find “me time” during the day. Rather than trying to squeeze every ounce of productivity, energy and willpower out of myself to do one more chore, I can recognize that what needs to be done for that day is done and I can (gasp!) sit down and relax. Hello sanity!

Some of the biggest changes, however, I had to make within myself. Come to find out, I’m a pretty uptight person. It only took 4 kids in 4 years to realize I need to loosen up a bit. The kids have areas in the house that are almost exclusively for their use. And I’m not so worried about keeping those areas pristine.  I’ve found that it doesn’t bother me too much to see a messy play room, backyard or hall bathroom and if the kitchen, living room and master bedroom are picked up and kept neat then I feel much calmer. I’m happy to let the kids play throughout the house, but I’ve become more protective of those spaces and make sure they get straightened up throughout the day. So when Evangeline eats her breakfast at the living room coffee table and somehow manages to get every pillow and blanket thrown on the floor amid her trash and dishes, I don’t freak out. I can better accept that where kids are, there messes are also. But when  breakfast \ morning TV time is over and she’s ready to move on to the next thing, she has to pick up the living room first. She can make the mess, but she doesn’t get to leave the mess.

This brings me to my second major mental unclenching:  allowing Evangeline more freedom. She is one of those toddlers who is too smart for her own good. Since she began walking, Evangeline has forced us into this very delicate tug of war. We want to encourage her personal growth and curiosity, but we don’t want to have to keep cleaning up the honey she climbed up on the counter to get off the top shelf and spill time and time again. I am trying to better direct her energy and skills. It is now her sole duty to check for eggs each day, a chore she delights and takes pride in. She is also able, willing and allowed to help fold clothes — something I never let her do before. She and Felicity are in charge of switching the laundry over. God bless a front loader! By loosening up just a little and allowing Evangeline more (guided) freedom, we’ve all been getting along much much better.

I’ve been enjoying my children much more. More often than before I have the feeling that I can do this. It’s exhausting and there’s no way around that. Genevieve is doing great, but not so great that she’s sleeping through the night and feeding herself during the day. Reuben is still the girls’ rag doll they carry from room to room despite his shrill whining. And big mama micromanaging hen, Evangeline, can’t take the hint when Felicity tells her to just leave her alone. But somehow amid the chaos we’re finding a little bit of order, a little bit of freedom and a lot of stories for the blog!

Yeah, it’s been a while since I’ve updated the old blog. I’m just going to plea newborn status and move on.

So, we’re over halfway through the year and I figured it’s time for a little reading challenge update. Since I last updated in April, my book count has taken off. As of today, I’ve read 23 of 35 books and 6,692 pages out of 11,000.

Audiobooks have helped those counts a great deal while not adding much great substance. I have no shame though in admitting that I greatly enjoyed listening to back to back Nero Wolfe novels.

Speaking of goals, however, I have done very little to further my Southern works repertoire. Thanks to the magic of audiobooks, I’ve listened to A Good Man is Hard to Find by Flannery O’Conner and The Moviegoer by Walker Percy. I can’t recall much emotion following the completion of either of those books, but I’m at least glad to have them crossed off my list. Since reading those in early April, however, I’ve read nothing else Southern related. We’ll see if that bug comes back around to motivate me before the end of the year.

I have read some books that I’ve enjoyed including; The Hangman’s Daughter by Oliver Potzsch, The Prisoner of Heaven by Carlos Ruiz Zafon, The Salinger Contract by Adam Langer The Mysteries of the Middle Ages by Thomas Cahill and The Silkworm!!

I didn’t get into the Harry Potter fandom until after the books were all published, so I missed out on the anticipation and worldwide excitement for each release. Although Cormoran Strike pales in comparison to Harry Potter in the global scene, it’s been fun to be a part of the excitement. The second installment was a little grittier than The Cuckoo’s Calling, however it was a great read. Galbraith\Rowling included a considerable amount of character development in The Silkworm which makes me even more excited for this series to continue.

I am proud to announce I finished a non-fiction, non-audiobook! My brain has been moving so slow lately, it’s taken a lot of motivation to pick up a book. But Thomas Cahill did it again; he enraptured my attention in the 5th book of his Hinges of History series, The Mysteries of the Middle Ages. I read the first installment, How the Irish Saved Civilization, then skipped books 2-4 and picked up in the middle ages. Ryan enjoyed my reading this book, as I think it is one of his life goals to prove to the world that the 11th-13th centuries weren’t stagnant, oppressive bleak eras when people sat around waiting for the Enlightenment. For me, it was very enthralling and all mostly new. I feel I have a much better framework for how the lives of St. Francis, Thomas Aquinas and Dante fit into history, as well as new-to-me important figures such as Eleanor of Aquitaine and Giotto. I look forward to reading the next installment covering the Renaissance. 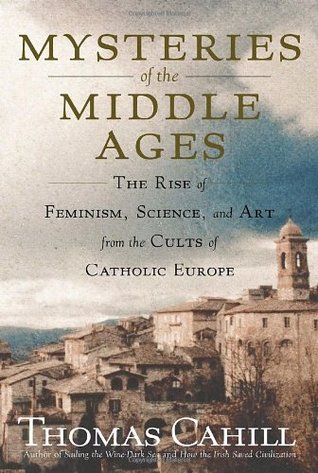 I haven’t set out to read book series, but I find myself in the middle of a few. In addition to Cormoran Strike and The Hinges of History, I’ve  also been following  The Cemetery of Forgotten Books. The third installment, The Prisoner of Heaven was refreshing. The first two went from dark to darker so it was nice to have a slightly lighter story. Albeit not entirely a light and fluffy book. It has made me want to go back and re-read the first two as this book fills in a lot more history absent from the first ones. It feels like there’s a lot of discrepancy, but it may be that I’m not remembering everything correctly. 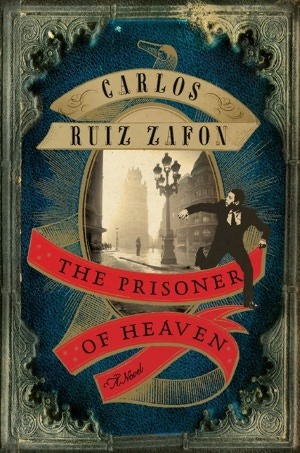 As for what’s next, I’m not so sure. I’ve been listening to a lot of TED Radio Hour episodes on NPR and have tucked away a few book recommendations. I’ll have to wait and see what our library has. I dare say we’ve had a pretty calm month. The school year has started again for Ryan, so I’m in the deep end of solo parenting 4 under 4. We’re trying to get back into the groove of a routine, or at least eating every day. Each day is a little bit different, just enough to keep me on my toes. If you don’t see me around here much, know it’s because I’m trying to survive and may not have time to document it.